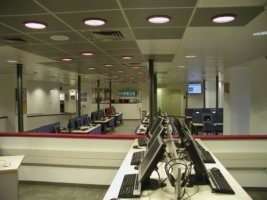 The Mount Scopus campus has over 750 computer stations for student service. Most of the stations are concentrated in two computer centers. The first center, named after Berl Gings, was inaugurated in 2000 and includes about 230 computers. The second center, named after Agnes Gings, was inaugurated in June 2005 and includes about 200 computers. In the computer centers we offer teaching classrooms with advanced teaching systems, various printing services, multimedia means as well as training and consulting services throughout the hours of operation. The main emphasis in operating computer centers is based on the use of information systems as part of a command and control system that enables effective management of computer resources and the ability to immediately diagnose and deal with faults, and offer quality and efficient service alongside advanced hardware.

The computer centers on Mount Scopus

Deployment of computer stations on the Mount Scopus campus

Distribution of printers by workspaces